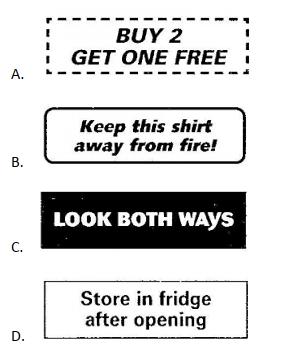 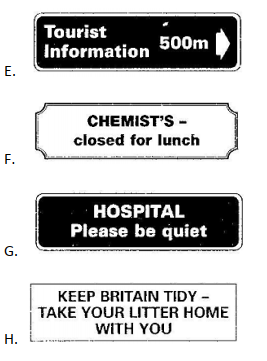 For question 1 – 5, mark the correct letter A – H on your answer sheet. Example:
0. You shouldn’t drop rubbish in the street. Answer: H
1. You should be careful because this will burn.
2. You shouldn’t talk loudly here
3. You pay the same but get more.
4. You should keep this in a cool place.
5. Be careful when you cross the road.

Tanya often plays games and ……… sports with the children.

"I went to an awesome concert last night!"

"Do you want to watch the film now or later?"

Shall we meet at six o’clock tomorrow?

Complete the telephone conversation.
What does Katya say to Harry?
For each numbered question, write the correct answer.

A. I’ve got a terrible stomach ache and a headache.
B. What a shame! But I don’t feel well enough to go out today.
C. I’m really sorry. When did she leave?
D. Hello. I’m still in bed. (Example)
E. I hope so! I’ll text you and let you know.
F. She’s been at the doctor’s since this morning.
G. It’s not that – I’m afraid I’m not feeling well.
H. Yes, before she went to work. Why did you call me?

Read the article about an old lady who did something special on her 101st birthday.
Are the sentences below ‘Right’  ‘Wrong’ ? If there is not enough information to answer ‘Right’ or ‘Wrong’, choose ‘Doesn’t say’.

For her 101st birthday, Mary Hardison, from Utah, wanted to do something a bit different. So, instead of having a party and inviting her friends and family to her home, she decided to go paragliding. She is now in the Guinness Book of World Records as the oldest person in the world to do this. She got the idea from her 75-year-old son, who started doing the sport a few years ago. After the jump, she spoke to journalists and told them: “I don’t want my son to do something that I can’t.”
Mary did her flight with an instructor called Kevin Hintze. He said she was not afraid, even when they were turning over in the air. While she was coming down, Mary said she looked around, at the buildings and at the mountains. On the ground below, she could see her children, grandchildren, great-grandchildren and even a few great-great-grandchildren. They cheered and held up signs that said HAPPY BIRTHDAY GRANDMA!
This isn’t the first time Mary has done something interesting. On her 90th birthday, she went to Disneyland. A few of the rides were shut for repairs, but she went on all the ones that were open. For her next adventure, she’s planning to go down the Alpine Slide at Utah’s Park City Mountain Resort. It is 1000 metres from the top to the bottom, and very fast, but Marry isn’t afraid at all. In fact, she can’t wait.

Example:
0. Mary Hardison had a party for her 101st birthday.
A. Right B. Wrong C. Doesn’t say

Mary’s son tried paragliding before his mother did it.

Mary spent more than an hour talking to journalists after her flight.

Kevin said Mary was worried during some parts of the flight.

Mary was able to enjoy the view during her flight.

Some members of Mary’s family travelled a long way to watch her.

When Mary went to Disneyland, some of the rides were closed.

Read the text about Australian cities.
Choose the best word for each space.

Australian cities have a lot to offer visitors to (0) ...the... country. Among the popular are Sydney, Melbourne, and Cairns. visitor to Australia should go to Sydney. Its Opera House and Harbour Bridge are famous the world. Melbourne is  great Australian city. It has excellent museums and  modern art center. Phillip Island is not  from Melbourne, and here you can see koalas, penguins, and kangaroos. Cairns is in Queensland, in the North West of Australia. Here you can enjoy the rainforest and the ocean, with its wonderful fish. Cairns is a great place to about the culture of the Aboriginal people of Australia.

Read the descriptions of some words about reading and writing. What is the word for each one? The first letter is already there. There is one space for each other letter in the word.

Complete the blog. Write ONE word for each space.

Thank you for visiting my blog. I you enjoy reading it. My name is Caitlin and I’m 14 years . I’ve always loved cooking. I was nine, I told my parents I wanted to be chef and that’s still my plan today. I especially love making cakes and baking. On this blog, I want to show people much fun it is to cook. I also want to show them that cooking a meal can quick and easy and that it tastes better food that is made in a factory. And remember, if you do the cooking, you don’t have do the dishes! So you can make much mess as you want. I always do! Don’t forget leave me a message if you like anything on my website. Happy reading!

You have just bought a birthday present for your sister. Write a note about it to your English friend. Make notes about:
- what you have bought for your sister
- why you chose it
- Which shop you bought it in
Write 25 – 35 words.