Why has Lukas written this email?

Johnson Daniel will hold a party

Fit in Mind and Body

Are you in good health physically and mentally? Or do you feel the effects of stress and unhappiness in your life? Read more about how yoga can guide you to better health and a better way of living. Mike Rogers reports:

Yoga is a very old tradition of maintaining and restoring physical and mental health and leads to happiness and peace of mind. There are many different kinds of yoga, but they all work to develop techniques for relaxing the mind and body. The most popular form of yoga in the Western world is Hatha yoga. Hatha yoga has a long history and concentrates on body postures or positions, that allow the muscles to stretch and relax. It also focuses on controlling breathing so that the body and mind grow calm. Although it is a very gentle activity, Hatha yoga is actually an ideal form of exercise, especially for people who do not like to work out with weights and machines. A regular program of Hatha yoga is the perfect way to stay in shape, put your mind and body at ease and get rid of the day's stress.

Astanga yoga is similar to Hatha yoga except that it is more energetic. Astanga yoga uses the body positions and breathing exercises of Hatha yoga and adds greater motion and movement to it. Astanga yoga classes are more like aerobics classes with a lot of movement and physical energy. The goal, of course, is always the same - to improve health through careful exercise and concentration. People who participate in this kind of yoga generally want a more thorough workout than Hatha yoga gives them. This kind of yoga often attracts younger people who have lots of energy and want to exercise as well as find a little peace of mind at the same time.

Now, this is serious yoga and not for the very active types. Mantra yoga focuses on mental concentration, Participants sit in a yoga posture and focus their minds on one peaceful idea or image. Then they repeat a single word. This is called their ‘mantra’. The most typical mantra sound in yoga is ‘om’. People repeat this word over and over again as a way of clearing their minds. The goal of Mantra yoga is to find inner strength through control of the body and relaxation of the mind. Mantra yoga is an excellent choice for people who want to avoid too much physical activity but are searching for better mental health. If you're looking for lots of activity, this is probably not the yoga for you.

What kind of yoga would you recommend for someone who wants everything energetic?

What kind of yoga would you recommend for someone who wants a really powerful workout?

What kind of yoga would you recommend for someone who is not interested in getting physically fit?

What kind of yoga would you recommend for someone who wants to do a well-known, traditional style of yoga?

What kind of yoga would you recommend for someone who wants to improve mental health?

What kind of yoga would you recommend for someone who does not want to work out with equipment?

What kind of yoga would you recommend for someone who finds the best perfect way to keep fit?

Last weekend, the seventh grade went to New York City and watched The Phantom of the Opera on Broadway. It was our school's first-ever trip to Broadway and was a really fun time.

The music was very well done. The actors were talented singers and very good dancers. The set itself was artistic and amazing. Being at a Broadway musical was a very unique experience. We had really good seats in the theater, so we could see everything perfectly. Plus, our seats were really comfortable.

After the musical was over, we went to eat pizza. New York pizza is very famous and it was delicious. At the restaurant, we had to wait a long time to sit down and eat. While we were waiting, we went outside of Central Park. There was a group of acrobats putting on a show for everyone to watch. They jumped and flipped so high and fast. It was almost as impressive as watching The Phantom of the Opera.

After we had pizza, we went to our hotel and had an awesome night together as a class. We played games in the hotel's recreation room. It was so much fun going to New York, and we are sad that our trip had to end. Next year, the sixth-graders will be going to New York to see a Broadway show. We hope they get to see The Phantom of the Opera, but we are sure any show they watch will be great. 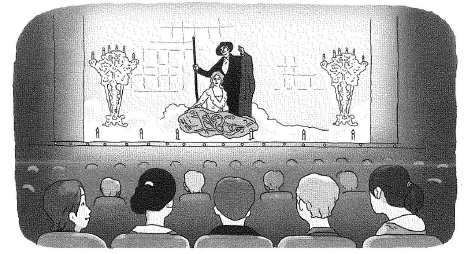 What would be the best title for the article?

What is suggested about The Phantom of the Opera?

According to the passage, the restaurant was _____.

According to the passage, what will the sixth-grade students do next year?

Read the passage and choose the correct word to fill in the blank.

There are seventeen kinds of penguin (0) in the world. Emperor penguins are the of them all. They spend their lives in the Antarctic and are the only animals to stay there the winter. Other animals find it cold. The female Emperor penguin lays one egg a year in winter. Then she leaves to go and catch fish. The male keeps the egg with him on the ice. He to keep it warm. He does this by putting it on his feet. He looks after the egg the baby penguin comes out, usually takes about 65 days. Around that time, the female Emperor penguin returns to look after the baby chick. The hungry male can finally go into the sea to eat some fish.

Do you remember I wanted (0) to invite you, Sasha and John to my new house? Well, about next Saturday evening? We have a beautiful garden with lots trees. We may have a barbeque outside if it doesn’t rain. My mother is really good cook and I am going to help her make the food. Afterward, don’t we watch a film? Could you bring a DVD with you as I haven't got many here? John’s coming bike and Sasha is getting a lift her father. I hope you’ll be able to come too.
Let me know soon!

Read the note from your friend Eric. Write a note to tell him what he wants to know.