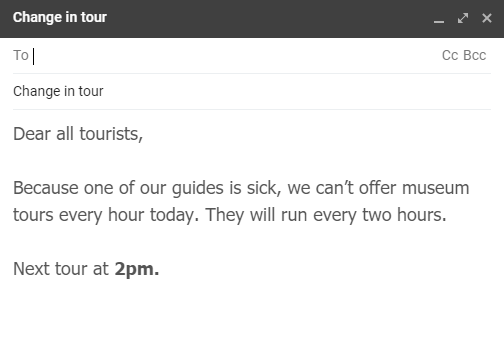 Read the text about each of the teen bloggers. For each question, choose the correct answer.

I started writing my popular music blog because I love music. I like it when readers send me reviews by email about a new band or concert they’ve seen, and I put these on my blog for everyone to read. I’m still at school, so I’m careful about spending too long on my blog, which is difficult as writing well takes time. I don’t think I’ll write it for much longer. I’m busy, and it takes time to post regularly.

I began writing for my school magazine. I stopped last years because of exams, but I missed it, so I started writing it again. I’m still writing for it now! The blog’s new to me, and I write about local events. I get ideas from friends when I can’t decide what to write about – we always think of something interesting that happens in our town. At first, almost nobody visited my site, but now more so, I’ve had some lovely comments.

Last year, I used to write for my school magazine, which I found really interesting. I don’t think it’s hard to write a good blog. Mine is about things from daily life that happens at our school. My older sister also has a blog, but we’re writing about fashion. We don’t discuss what we’re planning, but we read each other’s blogs sometimes. I like giving advice to students who write in asking for it – it’s good to know I’ve helped.

Who writes both a magazine and a blog?

Who says that studying and writing a blog at the same time can be hard?

Who answers questions from other people who read their blog?

Who plans to stop writing their blog soon?

Who didn’t have many people reading his/her blog in the beginning?

Who asks friends to help them write their blog?

Who says writing a blog is easier than some other types of writing?

Reading the passage. Answer the question:

Eric was on his school's track team- kind of. He was the fifth-fastest runner. Only four runners could run on a relay team. Eric was the team's alternate. The alternate doesn't get to run in the race. He only fills in if another team member can't run.

Eric worked out with his teammates every day. He would practice at home, too. Eric wore the same uniform as the other runners, but he never felt like part of the team.

One Saturday morning, Eric's team attended a track meet. Eric went with them like he always did. As his team jogged toward the start line, Dan, the team's fastest runner, twisted his ankle. He cried out in pain. Coach looked at Dan's ankle. "Dan won't be able to run today. Eric will have to take his place," Coach said. Eric realized that he would finally get to run. He was ready.

The race started out well. Eric ran. He ran as he had never run before. He passed the runner in front of him. He ran even faster. He passed another runner. Eric kept running faster. The leader was only a few feet in front of him. Eric ran with everything he had. He shot out across the finish line - finishing in the first place. His team had won! He had brought them victory.

He looked down at the cold metal baton in his hand. Then he looked around at his teammates. They carried him out on their shoulders.

Why was Eric only "kind of" on the track team?

Why does Eric get the opportunity to run?

What happens when Eric finally gets an opportunity to run in a relay race?

What is not true about Eric?

How does the end of "The Fifth Runner" conclude the story?

Read the passage and choose the correct word to fill in the blank.

There are three sizes (0) of Schnauzer dog. The two smaller sizes first to England over 50 years ago, but the Giant Schnauzer has not been here very long. The name Giant is a good one because the dogs are 65 to 67.5 cm high.

All the dogs have long hair should be cut quite often. Most smaller Schnauzers are grey in , the Giant Schnauzer is usually black.

Schnauzers come from Germany, where farmers use the dogs to help with their sheep, and they are also used from the police because Schnauzer dogs are very intelligent.

A Schnauzer makes nice family dog. It is friendly and very good with young children.

Mum asked (0) me to let you know that I arrived home okay. I enjoyed traveling back train, and I was surprised that only took me three hours to get home. Thank you very much for looking after me while I was in France. I'm going back to school next week. My French is a lot better it was before, so I hope my marks will improve!

I like to keep practicing French and I’m looking a pen friend. I thought of your friend's son Elian. We can send emails once a week. Let me know what you think. I hope we can see other soon.

Read a postcard from your friend Alex. Write a postcard to answer his questions.