Look and read. Choose the correct words from the box and fill in the blank.

Example: This is made from wood. We can write on it and make books and magazines from it too. paper

There are hundreds of different kinds of these. A fly is one example that everyone knows.

You make it from vegetables that you don't have to cook.

If you have to go outside when it's very cold your hands will stay warm in these.

This animal, which lives in the sea, has eight legs.

When there's snow on the ground, you can pull this up to the top of a hill, then sit on it and go down the hill again!

You use this to draw straight lines.

This is the time of year when the weather is usually cold.

Some people put this in hot drinks like tea or coffee. It is white or brown and you can make sweets with it too.

When you write a postcard to someone, you should put this on it before you send it.

This is made from many different kinds of fruit. People often have it on bread for breakfast.

Sarah's father is talking to Sarah about a circus. What does Sarah say to her father? Read the conversation and choose the best answer. Write a letter (A-H) for each question. You do not need to use all the letters.

A. At half-past seven every evening.

C. We usually go there by car.

D. No, but I've seen one on the television.

F. She works much too hard.

G. But that's a long time from now. Can't we go tomorrow?

Sarah's father: Would you like to go and see the circus, Sarah?

Sarah's father: Have you been to a circus before? I can't remember.

Sarah's father: What time does it start? Do you know?

Sarah's father:  OK. Well, that's too late for your brother, I think.

Sarah's father: I'll talk to your mom about it. Where is the circus?

Sarah's father:  OK. I'll buy some tickets and we can go on Saturday.

Sarah's father: No. It's better to go at the weekend.

Read the text. Choose the correct word from the box for each blank.

Helen usually walks straight home after school, but last Monday, she didn't want to, because her mother was at the dentist's. Helen had a key to their door but she decided to go to the park. She went to play on the first. She sat down, kicked hard and went higher and higher. She closed her eyes and felt like a in the sky. Suddenly, she remembered her mother's words. "You must be home by four o'clock." She ran home, but when she put her hand in the of her skirt to take out the key, it was empty. She went to her grandmother who lived on the next street. Helen began to . "Here's another key for your house. Take this one", Helen's grandmother said. "Please don't tell Mum!", Helen said. "OK. It's our secret", her grandmother . Helen went home and sat down to watch TV, just before her mother arrived!

Read the text and choose the best answer for each blank. 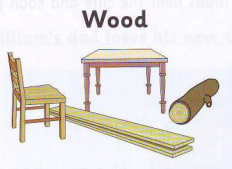 Wood comes from trees and also from a few other, smaller plants. It is strong, easy to cut, and you can find it in many places in the world. We burn it we are cold, and we make thousands different things with it. are two kinds of wood, "hardwood" and "softwood", but these are only names. They are not hard or soft. The difference is this they come from different kinds of trees and wood is good for different things. Most hardwood comes from trees with leaves which in the autumn.

These trees are deciduous trees. Hardwood is good for tables and chairs, for example, because it is more beautiful softwood. Most softwood comes from trees which have left in summer and in winter . Softwood is good for big things, for example, bridges, and we can make paper, paints, and plastics from it. Wood is not very expensive or difficult to get, but we must be careful. We are the wood from the world's jungles and forests very .

Uncle Tom has a difficult day!

My name's Katy. My Uncle Tom is an actor. He's not famous but last year he made a film with some very famous actors. It was very exciting. It was the best job he has ever had. In the film, he was a bad man! He had to steal lots of money from a bank.

One day, Uncle Tom was in a park with some other actors and the cameramen. He had to run across the grass there with his big bag of money. The film cameras were behind him. A policeman was in the street. He didn’t see the cameras but he saw my uncle and shouted ‘Stop!’ He ran after my uncle and took him to the police station in his police car.

The policeman asked Uncle Tom lots of difficult questions about the bag of money He didn’t believe my uncle's answers. But then one of the famous actors from the film, called Fred Star, arrived to help. When Fred Star explained everything, the policeman believed Uncle Tom.

The policeman said sorry, and Uncle Tom went back to work with his bag of money! Outside the police station, a journalist took a photo of Uncle Tom with Fred Star and it was in the city newspaper the next day! It was very funny!

Katy has an uncle who's an actor.

He made an exciting film last year with some very famous actors.

Tom stole some in the film.

In the film, Tom had to run on the grass in .

There was a in the street who saw him.

The policeman drove Uncle Tom to .

Tom had to answer the policeman's about the money.

, who was another actor, came to the police station to help.

The next day, a picture of the two actors was in .

Read the passage and write the missing words. Write one word on each blank.

This morning, when I was eating my breakfast, the postman came with a present for me. But my birthday's November! Well, I opened it and there a beautiful new camera in it, and a letter which said, "You have our competition!" I couldn't understand it.

I showed it to Mum and she said, “Last summer you an excellent photo of a circus. I sent it to a competition in one of my magazines."

Now I want be a photographer when I'm older!