Example: This is an organization that holds money belong to others. a bank

A man who works in business, especially one who has a high position in a company.

When you get involved in an activity or journey with another person or group, you do it.

When you give someone knowledge or train someone, you do this.

Containing a lot of things or people or a lot of somethings.

This animal is one of the cleverest animals in the world and it lives in the sea.

It is the point, area, or line that is formed by the meeting of two lines, surfaces, roads, ...

The man to whom a woman is married.

To say or tell people something more than once.

A large hole in the side of a hill, or mountain.

A game or competition in which you answer questions.

Emma is talking to her friend, Helen. What does Harry say?

Read the conversation and choose the best answer. Write a letter (A-H) for each question. You do not need to use all the letters.

Emma: Did you enjoy your day at the zoo, Harry?

Read the story. Choose a word from the box. 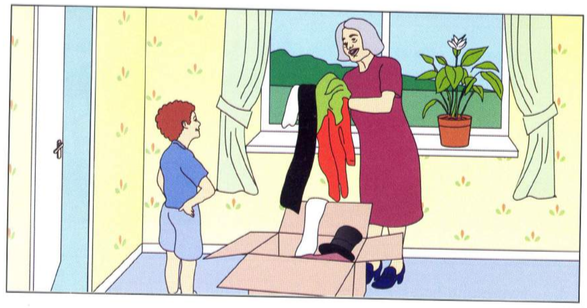 I went to my grandma's house for the day last Sunday and after lunch, she asked me a strange question "What kind of would you like to do, Tony?", she said. I thought for a minute then answered, "Well, I'm only seven so I haven't yet, Grandma, but I'd like to be a pirate I think. Pirates have lots of fun in all my story books!".

Grandma laughed, then found me a scarf and put it around my . After that, she got an old toy parrot and put it on my shoulder. Next, she painted a beard on my face. Then she drew a map Jar me and I had to find the in her garden. It was a chocolate cake! I love going to my grandma's house. She's very . She always thinks of good games to play.

Now choose the best name for this story: .

Read the text. Choose the right words and write them on the lines.

"Hippo" is a short word for "hippopotamus". The word "hippopotamus" means "river horse". Hippos are river horses because they live rivers and lakes and eat grass. Hippos never eat meat but they are very strong and brave animals. They aren't afraid crocodiles or boats. When they angry, they open their mouths to show their big teeth. The eyes and nose very high on a hippo's head. This means that a hippo can swim with only the top of its head out of the water. It can still see, and take in the through its nose. But hippos also like going under the water. They are very good walking on the bottom of a lake. They close their noses and ears and can stay under the water five minutes!

night, hippos leave the water and spend five six hours eating grass. But early the next morning, they to go back into the water before the hot sun comes up in the sky again.

One evening after work, William's dad was going home in his old blue and white car when suddenly it stopped. He couldn't start it again. There was a lot of traffic behind him on the road. A policeman came and, together, they pushed the car off the road. ‘That's enough!’ William’s dad thought. ‘I must have a new car. I’m going to buy the silver one that I saw yesterday.’

So on Saturday, he bought a new car. William and his dad wanted to try it so they drove into the town. After half an hour, they decided to stop because they were hungry. They found a place for the car in a small, quiet street and left it there.

They had a snack in a café and then they decided to drive home again. Outside in the street, William’s dad said, ‘Where's the car? Which road is it in?’

They spent fifteen minutes looking for it. Then they found a policeman and said, 'We can’t find our car!'

The policeman looked at them and said, 'I'll help you find the car, but is it a blue and white one?'

‘Good!’ said the policeman, ‘because I remember you and your old car!’ They looked in all the roads near the café and soon found the new silver one!

William's dad was going home when his old car stopped.

The colours of the old car were blue and white.

On the road behind the old car, there was .

and a policeman pushed the old car off the road.

William's father decided he had to get a .

William and his father went into in the new silver car.

They left the new car in a and walked to a café.

After their snack, they looked for the new car for .

Read the letter and write the missing words. Write one word on each blank.

Wednesday, September 8th
Today wasn't a good day at school. Everything went wrong. the morning, I forgot to put my history homework in my rucksack so my teacher wasn't happy about that. Then I lost my favorite pen. I cut my leg when I playing in the playground and I had an egg sandwich for lunch, which tasted horrible. Then, after lunch, I asked one my friends something in class and my teacher “Stop talking, Bill” and my face went very red.
Perhaps tomorrow will better!