Example: People usually eat this for breakfast with milk. cereal

This animal can carry people and their things across deserts.

Some animals have this kind of soft hair all over their bodies.

Breakfast and dinner are two examples of these.

An event happens suddenly, which you didn't know about.

This person writes about the news in a newspaper or a magazine.

Travelling through space is part of this person's job.

This is something small you can eat when it isn't time for lunch or dinner.

These are small animals that usually have six legs.

It is this person's job to stop fires in people's houses or forests.

At this time of year it is very hot and people do sports like swimming.

Complete the conversation between two friends. What does Joel say to Raya? Write the correct letter (A-H) for each blank. You do not need to use all the letters.

A. It's quite easy really. I'll help you.

B. The maths was easier than the other homework.

C. How far away is that?

D. Really? So why aren't you at home studying?

E. What's wrong with your computer?

F. Fine thanks, Joel. And you?

G. I've finished all my homework for tomorrow.

H. I live five minutes from here. Why don't you come and use my computer?

Joel: I'm fine, but I've got lots of homework to do tonight.

Joel: Because my computer's not working. I'm going to my cousin's house to use hers.

Joel: It's a short journey on the bus.

Joel: Are you sure? Don't you need it this evening?

Joel: Have you? Even the maths? I can't understand any of it!

My name is David. One day I was walking home when I saw a fire in the downstairs window of a very big house. I went to the door and shouted loudly but nobody came. There was a telephone in the street near the house so I phoned and told someone about the fire. After about five minutes a fire with blue lights on the top came round the corner. It was very exciting! Firemen were running everywhere, throwing water on the fire and then. Suddenly, everything was all right again. I went into the house with the firemen. The kitchen was badly burnt and it terrible but the other rooms in the house were fine. Then this man arrived. I knew him! He was a famous footballer but he was also the man who lived in the big house. He me very much and asked me for my name and address. Then, two days later, a letter arrived for me. Inside the there were two tickets to see my favorite team play! How good was that? 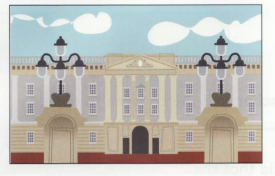 There are many famous places to visit in London. The most famous, perhaps, is "Buckingham Palace" it's the Queen's home. "Tower Bridge" is over 100 years old and you see it from one of the boats on the "River Thames".

London lots of things for families to do together. you want to go shopping, Harrods is London's most famous store but it's very expensive. You'll find that markets sell some very nice things and are cheaper. And you must visit "Hamleys" is London's best toy shop.

What about food? There are many restaurants in London the "Rainforest Café" is very good for children. When you go inside you see paintings of jungle animals everywhere! And in summer it's nice to have picnic in one of London's lovely, green parks. When it's rainy, go to the cinema at the science museum and a rocket go up into space! London's a great place for a holiday!

Read the story. Write some words to complete the sentences about the story. You can use 1, 2, 3 or 4 words.

One day in winter, Richard was walking through a busy street in his town. The street was white with snow and people were carrying large shopping bags. Richard was excited. It was the last day of school and now he was on his winter holidays.

Then, as he was walking in the snow, he kicked something. He put his hand deep into the snow and pulled out a small black bag. It was full of money! "Whose is this?" Richard thought.

Then, Richard saw a man in an expensive coat. He was searching for something and he looked really worried. Richard looked at the money again. He thought about all the computer games he could buy with it.

In the end, Richard decided to do the right thing. He ran up to the man. 'Excuse me, have you lost something?' he asked. The man looked surprised and said, 'Yes, I've lost a small black bag. Have you seen it?' Richard gave the bag to the man. 'Thank you so much,' the man said and Richard started walking away.

'Wait a minute,' the man shouted. Then, he took half of the money out of the bag and put it into Richard's hands. Richard thanked the man and raced to the restaurant where his parents worked. He couldn't wait to tell them his good news!

Richard's foot hit against something in .

He found a bag with lots .

The man Richard saw was wearing .

Richard wanted to get with the money he found.

The man was when Richard started talking to him.

The man gave Richard that was in the bag.

Richard went after he left the man.

Read the letter and write the missing words. Write one word in each blank.

I'm having a great time here with Michael. Yesterday we went to see a football match and I was happy - my team 5-3! It was very exciting! And I spoke to a friendly footballer but I didn't know he was! Tomorrow we're to go to the swimming pool. The swimming pool's outside but it will be nice the weather's good! you now having a good time at home? I'm coming back on Thursday.

See you then!
Tom

Look at the three pictures. Write about this story. Write 20 or more words.