Look and read. Choose the correct words and write them on the lines. There is one example.

Example
We read these to learn things or to enjoy stories. ...books...

1. These come from chickens. We cook them and eat them.

2. These often have music on them. We listen to them.

3. This animal files at night. Some people are afraid of it.

4. People eat these vegetables. They are orange.

5. This animal is long and thin and it doesn't have any legs.

Read the text and choose the best answer.

Paul: Did you buy anything, Daisy?

Paul: How did you get here?

Paul: Do you want to go and have coffee?

Paul: Can I carry your shopping?

Paul: We can drive to the Garden Café in my car.

Paul: That's my car, outside the supermarket!

Paul: Can we go to the cinema after the café?

Read the story. Choose a word from the box to fill in the blanks next to numbers 1–5. There is one example.

Last week, Jim invited me to his house to show me his new pet ...rabbit.... 'His name is Snow,' Jim said, 'because he's all white.' We played with Snow on the grass. When we threw a small ball to him, he picked it up and brought it to us. 'Wow! He's than my dog!' I said to Jim.

'l think he's hungry. Would you like to him?' Jim asked and gave me a carrot. When I held the carrot in front of him, Snow took it and hopped away under the in the garden.

Jim and I looked for him, but we couldn't find him. 'I don't want to lose him,' said Jim. We were very sad. Everything was in the garden. And then, there was a noise. 'It's coming from those flowers!' I said. We looked behind them, and there was Snow eating his carrot! 'Let's put him back in his ,' said Jim and picked up his naughty pet.

Now choose the best name for the story.

Read the text. Choose the right words in the blanks.

Every city needs a good hospital. People go to the hospital when ...they... need help.

The doctors and nurses work at the hospital wear long, white coats and white trousers.

Look at the pictures and read the story. Write some words to complete the sentences about the story. You can use 1, 2 or 3 words.

Last Saturday, Peter and his mum saw a model train in the window of a toy shop. Peter really wanted to get it.
'We can buy it for your birthday,' Peter's mum said.
Peter's birthday was on Wednesday, so on Tuesday, he and his mum caught the bus back into town. First, they went to a pet shop to buy food for his rabbit, but when they came to the toy shop, the train wasn't there!
Peter was really sad.

1. They bought some rabbit food at a .

2. Peter was because the model train wasn't in the toy shop.

On Wednesday, it was Peter's 10th birthday. At school, his teacher said 'Happy birthday, Peter!' but his friends said nothing.
Then, when it was break, they didn't play with him in the playground. They stood next to a wall and talked quietly about something.
"What's wrong?" Peter thought. He didn't understand why his friends didn't like him.

3. Only Peter's said 'Happy birthday' to him.

4. When it was break, Peter's friends stood near a .

After school Peter walked home slowly. When he opened the door, it was very quiet. But when he went into the living room, he was really surprised. All of his family and friends were there!
'Happy birthday, Peter!' they said.
Peter's mum brought a beautiful birthday cake and then Peter saw a big box on the table.
'That's for you,' said his dad. The model train was inside! It was a brilliant birthday!

5. Peter's house was very when he came home.

6. Peter's family and friends were in the .

7. On the table there was a for Peter.

Look and read and write. 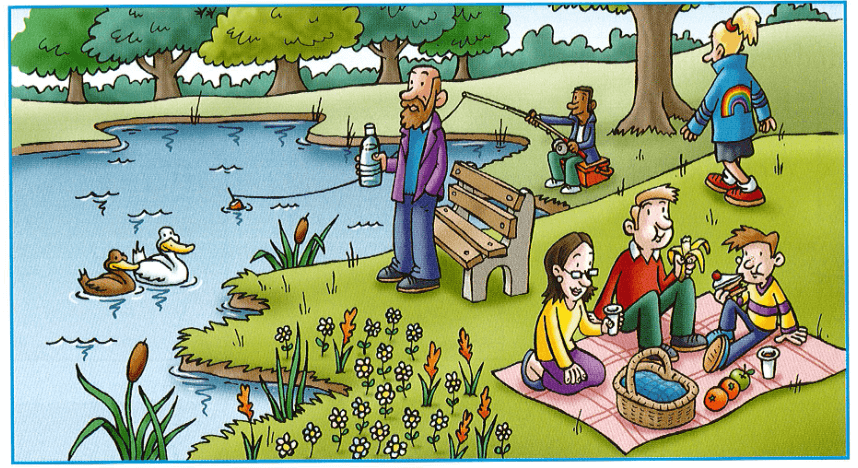 The man with a bottle of water has got a brown beard.

What is the man with fair hair eating? a banana