Read the passage and choose the correct answers.

Edward rang the Millers’ doorbell. Mr. and Mrs. Miller had moved into the neighborhood last month. They had a five-year-old son, and they had asked Edward to watch him that evening while they went out.

“Hello, Edward,” Mrs. Miller said as she opened the door.

Mr. Miller stood behind her with a boy at his side. “This is Lucas,” Mr. Miller said. “Lucas, this is Edward. He will watch you tonight while Mom and I are out.”

The little boy waved shyly to Edward. The Millers asked Edward to entertain Lucas for an hour and then put him in bed.

After Lucas’s parents left, Edward went with the boy to his room.

They played some games and built a tower out of wooden blocks.

“It’s time for you to go to sleep now,” Edward said. Lucas looked disappointed, but he changed into his pajamas and got into bed.

“Will you read me a story?” he asked Edward.

Edward took a picture book from the shelf and read it to Lucas. When he finished reading the book to Lucas, he turned out the light and said good night. But as soon as Edward left the room, Lucas called out to him.

“I thought I heard a sound,” Lucas said. “I think there might be a monster under my bed.”

Edward explained that there was no monster under the bed, but Lucas was still afraid. Finally, Edward went to the kitchen and found a flashlight.

He shined the flashlight under Lucas’s bed. “See?” he said. “No monster.”

“Will you stay with me in case one comes?” Lucas begged.

Edward could see that the little boy was frightened. He agreed to sit in the chair by Lucas’s bed, with the flashlight in his hand.

Edward sat in the chair, waiting for Lucas to fall asleep. The dim light in the room and the soft chair made Edward feel tired, too. He closed his eyes.

The next thing he knew someone was shaking him gently. Edward opened his eyes and saw Mr. and Mrs. Miller.

“We’re home,” Mrs. Miller whispered. “Thank you for taking care of Lucas. We had a wonderful evening.”

Edward shook himself in amazement. Was the evening over already?

Why did Edward go to the Millers’ house?
What did Edward and Lucas do before Lucas went to bed?
How did Lucas probably feel about going to bed?
Why did Lucas keep calling out to Edward?

Read the following story then choose the best answer to each question below.

Sandy and I could not believe how lucky we were to get picked for the dance team. We both tried out but never expected to make it.

Sandy was so excited that when she saw the roster she dragged me across the whole school and made us late for math class just to show it to me.

Being on the dance team was a lot of hard work. We had tough practices every day after school for three hours. We would start with stretches and then go into our routines.

He was a good coach but he was strict. He made all of us work very hard. Over time, Sandy and I improved. Our coach noticed.

"You girls have done a great job so far this year. I want to send you to New York City to represent our school in the state championships. I think you will be a great team, but I need you to keep working hard," he said smiling.

We both stalled shouting in exultation and the other girls congratulated us. It was a big moment.

Through the next weeks we trained harder than ever before and pretty soon it was the weekend of the championships.

"Are you ready?" Our coach asked us on the trip to the city.

"I am feeling great!" I said, but Sandy did not say anything.

We both waited for a moment and then she said, "I am very nervous. What if we make a mistake?"

Our coach laughed and said, "Of course you will make a mistake but just try hard, do the best you can, and I will be happy. Mistakes happen but you need to keep going. That's what is important."

The tournament was great but there were a lot of really good dancers so we didn't win. Our parents were still excited though, and our coach was happy. After the competition we got to have dinner in the big city and our coach gave us medals, even though we didn't win anything.

"What are these for?" I asked.

"For being great dancers and for all of the hard work that you girls have done," he said beaming. "and for making me the happiest coach in the State of New York. I cannot wait for next year's competition."

What is the story mainly about?

Why does Sandy drag the author across the whole school?

Which word best describes the girls' reaction to being sent to New York City?

What will probably happen to Sandy and the author next year?

Rain pounded down on the roof. I was trying to read but the sound was too loud. I couldn't help myself from being a little grumpy. I wanted to be outside playing, but the rain was keeping me inside.

My mom had gone to the grocery store, and my dad was spending Saturday at the office. I had planned to spend the day hiking, but Mother Nature decided that today was the perfect day for rain.

It meant that I would have to entertain myself. I spent most of the morning playing with my stuffed animals and reading. I was sitting next to the window staring out when I got a strange idea: why not just go outside anyway?

I put on my boots and a big raincoat and stepped out into the wet world. It was raining hard but it wasn't cold. All I could hear were raindrops and the wind. I decided to go on my hike anyway.

My feet didn't make any sound on the wet ground and the forest seemed different. I went to my favorite place and sat down. In the summer, my best friend Ellen and I would come here and sit for hours. It was our special place. All of a sudden, I thought I heard someone shouting my name. I turned and saw Ellen walking up behind me.

"Oh my Gosh! It's really you, Martha!" she said. "I can't believe that you are out here right now. I thought I would be the only person crazy enough to go for a walk in the rain." 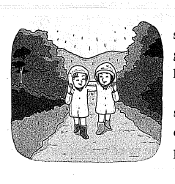 What is the best title for the story?

What was keeping Martha inside?

What did Martha think about being outside?

What will Martha and Ellen probably do next time it rains?

Read the passage and answer the questions. For each question, choose the answer which you think fits best according to the text.

Jenny found her old bicycle at the back of the garage. It was a lot smaller than she remembered. When she sat on it and put her feet on the pedals, her knees nearly touched her chin. She put it back sadly and went inside the house. Her dad was working on his computer in the study.
‘Dad, can I get a new bicycle?’ asked Jenny.
‘Sure,’ said Jenny’s dad. ‘Cycling is good for you. You can get one for your birthday.’
‘But my birthday isn’t for months!’ cried Jenny. ‘Everyone at school has a bike. They all go to the park after school together. I want to go too!’
‘Well, I’m sorry, but I can’t afford a bicycle now,’ said dad. ‘Why don’t you work and earn some money? You can save up for a bicycle yourself.’
Jenny was thoughtful.
‘I’m very busy now,’ dad went on. ‘I don’t have time to cut the grass. If you do that, I’ll give you five dollars.’
‘Okay,’ said Jenny. She went to the garage and got the lawnmower. She hadn’t used it before. It was quite heavy and difficult to push, but soon the grass was cut. She was putting the lawnmower away when her neighbor, Mrs. Watkins, looked over the wall.
‘You did a good job there! Can you mow my lawn too?’ said Mrs Watkins. ‘I’ll give you ten dollars!’
‘Sure!’ said Jenny. ‘I’ll come right away!’
That night Jenny went on the computer. She wrote ‘Gardening and Housework – Ten dollars an hour. Call Jenny at 23 Roseville Lane.’ She decorated the page with pictures of cleaning and gardening equipment. She printed it fifty times. Then she posted the pages through all the doors on her street.
That week, Jenny was very busy! Lots of people had jobs to do, but they didn’t have time to do them. So they called Jenny. Every day, Jenny rushed home from school. She did her homework quickly, and then she went out to work.
At the end of the week, she had $65! She told her father.
‘That’s enough for a second hand bicycle,’ he said.
‘Yes, but if I work for one more week, I might have enough money for a new bike,’ said Jenny. ‘In two more weeks, I could buy a really good bicycle!  I think that’s what I’ll do.  I want to have the best bicycle in the class, because I earned it!’
Jenny’s dad hugged her. ‘I think you learned something important. We appreciate things a lot more when we earn them. When we get something without earning it, we do not realize its true value.’

Mike in the Library

Finally, he finds a book about a man who lives in the woods without food or water. He puts the books on the front desk and waits for his mom. Mike's mom sits at one of the computers in the library. She checks her email and looks at pictures of flowers on the internet. Then she reads a news article on a website.

Mike's mom leaves the computer and walks over to Mike, holding up something out for him. Mike looks at her quizzically. It takes him a moment to recognize what she is holding. “I got that movie for us to watch tonight," says Mike's mom. “Are you ready to leave?”

"Sure," Mike says, now holding the movie out in front of him. He reads the cover while walking back to the library entrance. He puts his books and the movie on the front desk to check out. A librarian stands behind the counter holding an electronic scanner. "How long can we keep them?" Mike asks her.

Suddenly, Mike is surprised. His mother is checking out something else that is too big to put on the desk. It’s a picture of the ocean.

"What is that for?" Mike asks.

Mike's mom smiles at the librarian. "Yes," she says, "but we have to return it in three months."

Based on the books Mike finds to check out, we can tell that he is interested in:

While at the computer, Mike's mom:

According to the passage, how long can Mike and his mother use the books and the movie before they must return them to the library?

Based on its use in paragraph 4, it can be understood that "quizzically" belongs to which of the following word groups?

As used in paragraph 4, the phrase "check out" most nearly means

What does Mike's mom want to do with the picture of the ocean?

Using the passage as a guide, it can be understood that you can check out which of the following things from the library?
I. pictures
II. furniture
III. computers