It's not an opinion. When you know something is true or correct, you use this word. It is _____.

It is a terrible feeling. When you are in danger, you feel this. It makes you not want to move. What is it?

You go to school for it. Your parents care a lot about it. You need it to get a good job later. What is it?

Friends need to show it to each other. They will fight if they break it. When you have it, you believe the person. It is _____.

The ocean has it. Swimming pools have it. It is the distance between the upper and lower surface. What is it?

Farmers do this in the spring. People do it to seeds in the garden. They are _____ seeds.

People tell it to you when you look sad and it makes you feel better. They tell you to _____.

You do this when you are cold. You move quickly from side to side or up and down. You are _____.

This is your teacher, Mrs. Long. Tomorrow's school schedule has changed because of the school play. Tomorrow the drama club will be performing the play during our math class. So you don't need to study for the test. The math test will be next week. I think everyone will enjoy watching the play a lot more than taking the test.

Why does Mrs. Long write the email?

When will students take the math test?

I have an announcement about the school buses. Instead of picking you up on the south side of the school as usual, the buses will go to the north side. The bad roads on the south side are being fixed by workers. There are too many workers and not enough room for the buses. So please, remember to go to the other side after class to get on the bus.

Where do students usually get on the bus?

Why do students have to go to another side to take the bus?

Read the table. Then answer the questions. 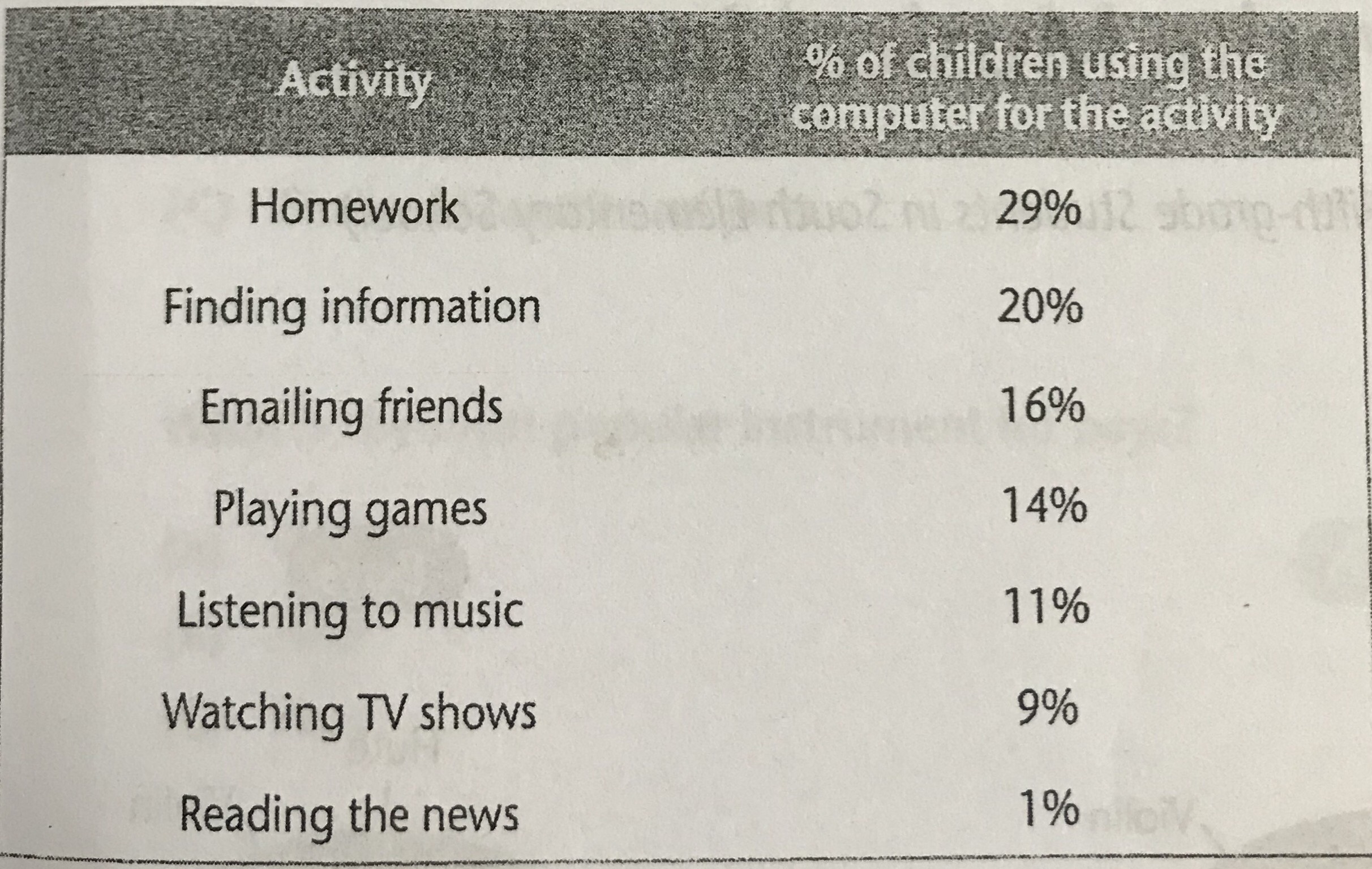 What does the table show?

Who is the table about?

What do students use the computer for most?

What do students use the computer for least?

Popcorn is a great snack. People eat popcorn a lot. Many people eat popcorn when they go camping. Also, everyone likes to eat it at a movie theater. You can even have it for a night-time snack! Making popcorn is easy. Here is how:

1. Put a little bit of oil in the pot. You don't want too much oil. Two spoonfuls of oil is enough. Use healthy oil. Olive oil is a good oil for popcorn. It is very healthy.

2. Put the corn seeds in the pot. Make sure the pot is covered.

3. Turn the stove on. You need low heat. It will burn if it is too hot.

4. Wait for the seeds to pop. Shake the pot while you wait. This will stop the popcorn from burning.

5. Turn off the stove when the pot is full of popcorn. Now it is time to eat! Put the popcorn in bowls and share with others.

What do you do right after you put oil in the pot?

When do people eat popcorn?

Why do you have to shake the pot?

On Wednesday, Mrs. Smith wrote two addition problems on the board and was calling on students to solve them. She called on Susan first. Susan couldn't solve the problem and put her head down on the desk. Timothy noticed that Susan looked sad for the rest of the day.

"What's wrong with you?" asked Timothy. "You don't seem to hate math. I always see you working on math problems during recess."

"I can't see the problems on the board anymore and I don't know why," cried Susan.

"Maybe you just need to get glasses. My friend Sam had the same problem last year and his parents took him to the eye doctor. With glasses he could see the board again!"

"Really?" said Susan. "Maybe I'll tell my mom to take me to the eye doctor."

Two days later, Susan got her glasses and enjoyed math class once again.

Where does the story take place?

What is the problem in the story?

What did Timothy advise Susan?

What sentence is true?

Mark and Tom were playing baseball in Tom's backyard. Usually they only played catch with the ball, but this time they really wanted to try to hit it. Mark just got a new bat for his birthday, so he was excited to use it. It was late in the afternoon and the sun was going down. Tom grabbed the baseball and he threw it to Mark. Mark took his bat and swung as hard as he could. The ball struck his bat and went flying into the air. It went so far that it was headed for the neighbor's house. It kept going and going until finally it smashed right into the window. "Uh oh," Tom and Mark thought they were going to get into trouble. Mark and Tom were afraid, so they ran into Tom's house.

The next day, Tom's neighbor came by and showed Tom's parents the baseball and some broken glass. His parents asked him what had happened and Tom explained to them that it was an accident. His parents made him apologize to the neighbor. As a punishment, Tom and Mark had to clean the neighbor's garage and pick up all the broken glass. They were always really careful when playing baseball after that.

What is the story mainly about?

Why did the boys want to hit the ball?

What was the punishment for the boys?

What is probably true?

"Dad, how far away from the Earth is the Moon?"

"It is closer to the Earth than the Sun is," answered his father.

James was really confused. He couldn't figure out how the Sun was so far away from the Earth. When he looked at the Sun in the sky, it was usually bigger than the Moon. He really wanted to know but his father was busy reading the newspaper. James waited a few moments but he couldn't wait for his father to finish reading.

"How far away is the Sun from the Earth?"

"Well, I don't know exactly. Maybe we can look this up on the Internet," answered his father.

James learned about how to search things on the Internet in computer class, so he was really excited now. James and his father searched all about the Moon and the Sun. They learned just how far away both were from the Earth. Now he knows clearly that the Sun is farther away from the Earth than the Moon.

Why did James want to know more about space?

What best describes the solar system?

Why did James think the Sun is closer to the Earth than the Moon?

There have been many great writers around the world, but none were better than Naguib Mahfouz. Mahfouz was born into a poor family in Egypt in 1911. Mahfouz liked detective and history novels when he was in primary school and moved onto Arabic fiction in secondary school. He read many books at a young age and learned many things, and he decided to become a writer. Mahfouz wrote over 30 novels, 350 short stories and dozens of movie scripts. Lots of his work was made into movies that became very popular throughout Egypt. He died in 2006 and will be remembered as one of the greatest writers in Egyptian history.

What is true about Naguib Mahfouz?

How old was Naguib Mahfouz?

One of the most important survival skills in the wild is making a fire. There are a number of things to consider when building a fire. First of all, there are four things needed to start a fire. They are a spark, tinder, wood, and oxygen. It is important to find small pieces of dry wood before trying to burn larger pieces. It is also necessary to choose a good location because too much wind can make starting a fire difficult. Lastly, the pieces of wood should be carefully placed to let the fire get enough oxygen to burn well.

Which is NOT needed to start a fire?

What do you first need to start a fire?