Read the announcement and answer the questions.

Friday, August 19 is our third annual Global Warming Day. We are happy to say that this year's event will be bigger than last year's. It is very important to get together and learn about something that is going to change all of our lives. We hope you all can come and enjoy this wonderful day with us.

- If you want to participate in the Melting Icebergs activity, bring a bathing suit.

- If you have any food allergies, make sure to report them to the cafeteria before Friday.

How many times has there been a Global Warming Day?​

Who will lead the lecture activity?

When does the demonstration activity finish?

Who will need to bring a bathing suit?

Read the e-mail and answer the questions.

Thank you for your application. I wanted to write this letter to you myself. I am excited to say that you have been accepted into our summer program. This year, we had more students apply than ever before. I was very impressed when I read your essay. You seem like the perfect girl for our program.

This summer, our program is going to be focusing on young writers. In your application, you said that you are very interested in writing poetry. When you join us on July 15, you should bring some of your writing so that we can work on editing it. If you'd like, you can send a sample to me now. I would be very happy to read it and give you some comments. That way, you can get an early start on the program.

I hope you have been enjoying your first week of vacation. I look forward to meeting you in person and reading more of your work. Have a wonderful week.

Why did Erica Lee write this e-mail?

In paragraph 1, the phrase "accepted into" is closest in meaning to _____.

According to the e-mail, what did Cathy apply for?

Read the article and answer the questions.

Earthquakes can start miles below Earth's surface. All of the water and land on Earth rests on top of giant plates that fit together like puzzle pieces. These are called tectonic plates. These tectonic plates are always moving and are always pressing against each other. An earthquake usually occurs where two of the plates meet. The edges of the plates are rough, and sometimes they get caught while the rest of the plate continues to move. When this happens, the plates release a lot of energy created by gathered strain that causes an earthquake.

Earthquakes happen almost every day all over the world, but most of them cannot be felt because they are so small. However, some can be devastating, especially when they occur in a place where tectonic plates come together. They can create mountains and tsunamis or even make land disappear. Recently, Japan and New Zealand have experienced large earthquakes. Experts say more will happen in the future. It is important to learn as much about earthquakes as possible because they are very powerful and can change human life a great deal.

What would be the best title for the article?

What is suggested about the students at the author's school?

Based on the article, what is probably true about earthquakes?

Why does the author mention earthquakes creating mountains and tsunamis?

The cafeteria was packed. The noise was deafening because every single seat was taken and everyone was talking. Taco day was always full of people but I had never seen it like this before.

I sat with my friends at our usual tables after waiting for a while. I was having a great conversation with them when I heard Alex from behind me. "Hey, Tom! Check this out!"

I turned and got a face full of sour cream. I was so angry that without thinking I picked up a taco from my plate and threw it back as hard as I could. Alex had been expecting it. He ducked, and the taco flew through the air, hitting Regina.

It all happened so fast that no one saw it happen. Regina looked around angrily. When she saw Alex laughing, she threw her taco at him. Everyone started throwing tacos at each other and soon the whole cafeteria was in chaos. I crawled under a table but I still got covered in tacos.

It was over fast, but everything and everyone was covered in beef, cheese, lettuce, and sour cream. It was one of the biggest messes I had ever seen! I felt bad for being one of the people who caused it. I stayed with a few of my friends and we helped clean up the mess.

It was good that we helped, because the people who didn't get into a lot of trouble. It was a lucky day for me but I still felt bad for my part in the chaos. I knew that I would never throw food again.

Why does the author throw his food?

What does the author mean by saying the whole cafeteria was in chaos in paragraph 4?

Which word best describes the cafeteria after the fight?

What does the author decide after the food fight?

Most people are very familiar with airplanes. In the industrialized world, a lot of people have ridden in planes. High up in the air, they can travel huge distances in a short amount of time. A plane ride from Detroit, United States to Incheon, South Korea can take fourteen hours. It is amazing that it takes only fourteen hours to travel halfway around the world.

People have been trying to fly for thousands of years. Ancient Greek, Egyptian, and Mayan legends involve great men or gods who could fly. Some even came from faraway worlds. Leonardo Da Vinci is famous for many inventions involving flight. He studied birds and designed machines that he hoped would fly. Unfortunately, he was never successful, but his attempts show how dedicated people were to find ways to fly. There were many other people trying to build airplanes since Da Vinci. One of these people was Clement Ader, a French engineer who made important contributions to the science of flight. Ader created a bat-like flying structure that supposedly flew for 50 meters.

Finally, the Wright Brothers came forward. The brothers are credited with malting the world's first airplane in 1903. They spent the rest of their lives modifying their airplanes to fly further and faster. The modem airplane is a lot different from what the Wrights probably imagined. A scramjet is an experimental aircraft that can travel up to 12,000 kilometers an hour. That's fast! 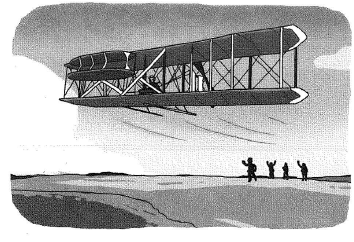 Which title best summarizes the main idea of the passage?

According to the passage, what is made the possible cause of flight?

In paragraph 3, the phrase "credited with" is closest in meaning to _____.

Which of the following is NOT true about the Wright Brothers?

Read the text and answer the questions.

The green anaconda is the world's heaviest snake. It is also one of the world's longest snakes. When the first Europeans came to South America, they reported finding snakes that were 100 feet long. Snakes of this site have not been found since, but native people say that they have found snakes up to 50 feet long. Most scientists think that the largest green anacondas are about 25 feet long.

The snakes spend most of their time in rivers. They are very heavy, so it is much easier for them to move around and hunt in the water. They are very good at staying camouflaged.

They are green and yellow, perfect colors for the murky waters of the Amazon River. When anything gets close enough to the water, the green anaconda strikes and eats. They like fish, birds, small alligators, and anything else that might get close.

The Amazon Basin is one of the least explored places on Earth. People still live deep in the jungle with almost no contact with the outside world. To find the biggest anacondas, this is where scientists need to go. However, there are no roads and the place can be very dangerous. The jungles are full of dangerous animals such as poisonous tree frogs. Native people can become violent on account of misunderstandings. Also, the snakes themselves are very good at hiding in the wet swamps of the Amazon. These things make it quite difficult for scientists to study them. 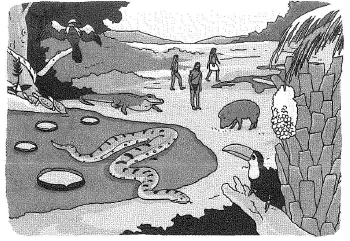 What is the main topic of the passage?

Why does the author mention that most scientists think that the largest green anacondas are about 25 feet long?

In paragraph 2, the word "camouflaged" is closest in meaning to _____.

In paragraph 4, the word "poisonous" is closest in meaning to ____.

According to the passage, all of the following can be threats in the Amazon River Basin EXCEPT ____.

Which of the following is true about the Amazon River Basin?

According to the passage, why do green anacondas live in rivers?

The idea of life in outer space has been talked about for a long time. Some scientists say that life development on Earth was far too unlikely for it to have happened anywhere else. Things had to be perfect for us to make it on this planet. Other scientists say that space is too big. Stars and other planets are far too numerous for there to be no other life in the universe.

For many years, there have been reports of visitors from other planets. People all around the world have claimed to see alien spaceships or even aliens themselves. There have been glimpses of these so-called UFOs (unidentified flying objects) flying through the air and they have even been captured on video. Some Americans believe that the U.S. Army found an alien spaceship crashed in the desert and then lied to the press about it. Although these sightings may be true, scientists have not found significant evidence that aliens exist.

If you go out into the countryside on a clear night and look up, you can see thousands of stars. Those stars make up a tiny part of our universe. There are more stars, planets, and galaxies than we can count. Even the smartest scientists can't even come close to defining how big space is. The number of possible stars and planets out there is bigger than our ability to count. If we are really on the only planet that can sustain life, then we are very special in a universe full of amazing things.

What would be the best title for this passage?

Why does the author mention reports of visitors from other planets?

What can be inferred about finding aliens?

What have some people claimed about aliens?

According to the passage, what is NOT true about the night sky?