Read the notice and answer the questions.

Classes will be canceled again tomorrow because of another snowstorm that is quickly approaching from the north. We will have to make up for the missed days in the spring so students will not miss any important lessons. Weather reports show that some places on the east coast have already gotten nearly a meter of snow and are experiencing high winds.

All students are advised to go straight home after school. Students, teachers, and parents should stay off the roads tonight because the storm will be arriving in the late evening and lasting until tomorrow afternoon. During the last snowstorm, there were a number of car accidents caused by snowy and icy roads, so please be careful.

Hopefully, the school will resume on Thursday, but this will depend on the severity of the storm. Listen to your radio or watch the news on Wednesday night and Thursday morning so you know whether or not to come to school.

What can be inferred from the notice about the location of the school?

Based on the notice, what is probably true about the snowstorm?

What is the notice mainly about?

Read the e-mail and answer the questions.

I am a student in your woodshop class who is very angry with you. Your class is very unsafe and your other students are irresponsible. The class is unsafe because there are not enough headphones to protect everyone's ears when we use loud machines. The machines are also dangerous. A power drill was on fire last week!

The second reason I am angry is because the other kids are irresponsible. Tommy and Jason shoot staples at people with the staple guns. John tries to scare people when they are cutting wood. Someone could lose a finger or an eye in your class. You should be watching the class more carefully. Please make your classroom safer or I will tell the principal.

Which of the following is NOT mentioned?

Why does the letter writer mention the power drill?

Which of the following is true?

Mrs. Jones had a tradition. At the end of the first day of school, Mrs. Jones always asked the children to vote on which animal would live in their class for the year. Then she would go to the local pet store and buy a class pet. The children loved the class pets. At the end of the day, if the students did all their work, the class got to play with it. It was exciting for the students to watch Perry the bird fly around or to see Timmy the turtle dive in the classroom sink.

Now, it was my class's turn to choose: Mrs. Jones asked each student what pet they'd like. After everyone chose, the most popular choices were a rabbit, a lizard, or a dog. Mrs. Jones had to say, "Students, we cannot have a dog. We cannot walk him at night."

The vote was between a lizard and a rabbit. The boys cried, "Rabbits are boring!" while the girls shouted, "Lizards are ugly!" Mrs. Jones hushed the class. "It's time to vote. Let the best pet win." She asked the class to raise their hands to vote. "Who wants a rabbit?" Ten hands rose. Next, she asked, "Who wants a lizard?" Eleven students lifted their hands. "I guess we have a winner," announced Mrs. Jones.

When did Mrs. Jones ask the children to vote on which animal would live with them for the year?

Why didn't the class choose a dog as the class pet?

What can be inferred about the students in the class?

What is likely true about this year's class pet?

A very long time ago, there lived a great king. The king was kind to everyone he met. He was good to his people and helped those in need. One day, the king found a man who was lost in the forest. The king knew the forest well, so he helped the man get back to his home. As luck would have it, the man was the servant of a very powerful wizard. To thank the king, the wizard gave him one wish. The king wished everything he touched would turn into gold. The wizard asked, "Are you sure you want that wish?" The king said yes. Once the wish was granted, the king touched an apple. Poof! The apple became gold. "I'm going to be the richest king in history," the king thought.

Weeks passed, and the king grew very rich. He thought he was the happiest king alive. One day, the king's daughter came to visit him. She had married a prince from a faraway country. She missed her father so much that she jumped into his arms when she saw him. Forgetting all about his golden touch, the king hugged his daughter back. Instantly, she was turned into gold. Right away he ran into the forest to find the wizard. After hours of searching, the king found the wizard and begged him for help. The wizard looked at the king with sad eyes. He said, "I asked if you were sure. I cannot take the wish back." The king felt terrible. He had changed his only child into a golden statue. For the rest of his life, he turned things into gold but always knew all the gold in the world would never make him as happy as his loving daughter had.

Why was the king given one wish?

Which was the first thing turned into gold by the king?

Why did the King feel terrible?

Why didn't the wizard help the king to save his daughter?

Leonardo Da Vinci is one of the most famous historical figures of all time. He was born in 1452 in Florence, Italy. He is often described as the perfect "Renaissance Man", which means he was curious about a wide variety of things. It is not easy to put Da Vinci into a category. He was a painter, sculptor, astronomer, inventor, mathematician, writer, and more.

Da Vinci, however, is perhaps most famous as a painter. He painted the Mona Lisa, which is one of the most renowned paintings in the world. He also painted The Last Supper, which shows the last dinner of Jesus.

As a scientist and inventor, Da Vinci designed and invented things that were not possible to create during the time that he lived. He made plans for helicopters, tanks, calculators, and solar-powered machines. He kept extensive notebooks in which he wrote in code. Historians have to hold the notebooks up to a mirror to be able to read them.

Da Vinci also made many discoveries, but he was not interested in becoming famous for them. He didn't publish any of his ideas. Not much is known about Da Vinci's personal life or childhood. Da Vinci was careful to keep it secret. He never married and did not have any children, but had many friendships with various people. Today, Da Vinci is a legendary figure. He proves that one person can be talented at many things at the same time.

What would be the most suitable title for the passage?

According to the passage, what did Leonardo Da Vinci make plans for?

Which of the following is true about Leonardo Da Vinci?

What does the author imply about Leonardo Da Vinci?

Why is Leonardo Da Vinci often described as the perfect "Renaissance Man"?

Why do historians have to hold Da Vinci's notebooks up to a mirror to read them?

Amelia Earhart is probably the best-known female pilot in the world. During her life, she did amazing things. Earhart was one of the first woman pilots in history. She set many flight records. One of the most famous was her solo flight across the Atlantic Ocean. She was the first woman to fly across the ocean alone.

Amelia Earhart was more than just a great pilot. She was a best-selling author too. She wrote many books about her flying experiences. Earhart also enjoyed helping other women succeed. She helped start the all-women pilot group called the Ninety-Nines, and she fought for women's rights.

Sadly, Earhart's disappearance is a big reason why she is remembered today. When she tried to fly around the world, she went missing with her flight partner, Fred Noonan. On July 2, 1937, Amelia Earhart vanished somewhere over the Pacific Ocean, never to be seen again. 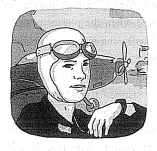 What is the big reason that Earhart is remembered today?

Why did Earhart establish a group called the Ninety-Nines?

Besides being a pilot, what else did she do?

The author mentions all of the following EXCEPT_______.

The piano is one of the most popular instruments in the world. The modern piano was invented by Bartolomeo Cristofori. Cristofori worked as the keeper of instruments for Ferdinando de'Medici, the Prince of Tuscany. It is unclear when he created the first piano, but the oldest Cristofori pianos that exist today are from the 1720s.

Interestingly, Johann Sebastian Bach did not like the piano when he first heard it. He thought the high notes were not loud enough. Eventually, he came to like it. Wolfgang Mozart was one of the first musicians to use the piano. He composed much of his music on it. Still, the pianos in Mozart's time were different than they are now. Today, the piano is one of the most well-known instruments in the world. It is used in orchestras, musicals, and in many other popular forms of music. What is the best title for this passage?

The author mentions all of the following EXCEPT_______.

According to the passage, which of the following is NOT true of Cristofori?

Why did Bach not like the piano at first?

Why does Cristofori's piano become popular?

What was probably true about the piano?