There are going to be strong winds tomorrow, _____?

Lan wishes she _____ enough money now to buy her mother a bike.

Maryam and Lan _____ pen pals for over three years.

Nam's grandfather is _____ artisan in the village.

Jack has a physical education class today, so he has to wear _____.

Katy and her brother are at home. But he suddenly falls down the stairs and his legs hurt a lot. In this situation, Katy should _____.

Read the story about Brad and his dad. Then answer the questions. 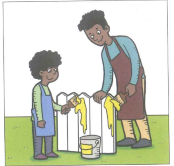 On Sunday morning Brad was woken up early by a sound from outside. "Who is making that loud noise?" he wondered. He got up and looked out the window, and saw his dad in the backyard. "What are you doing, Dad'?" Brad shouted. "Good morning, son," Brad's dad replied. "I'm going to remodel the house. Why don't you come down and help me?" "Remodeling our house?" Brad thought to himself as he changed his clothes. "What does that mean?"

Brad went to the kitchen. Then he drank a glass of milk and grabbed an apple as he headed out to the backyard. "What do you mean by remodeling our house?" Brad asked. "We are going to make some changes in the kitchen," answered his dad. "First, we are going to put up more shelves next to the sink. Then we will change some tiles on the bathroom wall. Lastly, we are going to paint the fence." "Wow, that's a lot of work, Dad," Brad said with a surprise. "Yeah," his dad replied. "But it isn't that hard to do. We will do each job one by one, and it won't take more than a month."

Brad and his dad worked hard every weekend for a month. It wasn't as easy as they had thought, but it felt so good when new changes started to show around the house. After a month, Brad's house now looks a lot different than before. It looks a lot better. Brad's mom and little sister are happy to see the new changes, too. Brad and his dad can believe how fresh and new a few small changes have made the entire house look.

What did Brad's dad want to do?

What change did Brad and his dad make in the house?

How long did it take to remodel the house?

What does Brad's family feel about the remodeled house?

Dark glasses that you wear to protect your eyes from bright light from the sun. (10 letters):

The sudden loud noise that comes from the sky especially during a storm. (7 letters):

A shop which sells and prepare medicines. (8 letters):

Fill in the missing word to complete the English proverb: "A friend in ____ is a friend indeed" (4 letters):